Armin Jozef Jacobus Daniël van Buuren OON (/væn ˈbjʊərən/ van BURE-ən,[2] Dutch: [ˈɑrmɪˈɲoːzəf jaːˈkoːbʏz ˈdaːnijɛl vɑm ˈbyːrə(n)]; born 25 December 1976)[1] is a Dutch DJ and record producer from Leiden, South Holland. Since 2001, he has hosted A State of Trance (ASOT), a weekly radio show, which is broadcast to nearly 40 million listeners in 84 countries on over 100 FM radio stations.[3] According to the website DJs and Festivals, “the radio show propelled him to stardom and helped cultivate an interest in trance music around the world.”[4]

Van Buuren has won a number of accolades. He has been ranked the number one DJ by DJ Mag a record of five times, four years in a row.[5] He was ranked fourth on the DJ Mag Top 100 DJs list in 2015, 2016, 2019 and 2020,[6] as well as third in 2017.[7] In 2014, he was nominated for a Grammy Award for Best Dance Recording for his single “This Is What It Feels Like” featuring Trevor Guthrie,[8] which makes him the fourth trance artist ever to receive a Grammy Award nomination.[9] In the United States, he holds the record for most entries, twenty-one, on the Billboard Dance/Electronic Albums chart.[10] 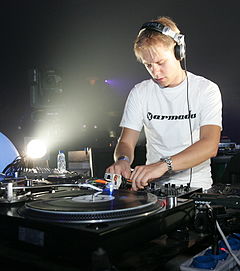 Van Buuren was elected best DJ in the world in the 2007 DJ Mag edition. On 12 January 2008, Van Buuren was given the “Buma Cultuur Pop Award,” the most prestigious Dutch music award.[40] On 17 April 2008, Van Buuren released his third studio album, Imagine. It features collaboration with singers such as Jacqueline Govaert of Krezip. The album debuted at number one on the Dutch Albums Chart. The second single released from the album, “In and Out of Love”, featuring Sharon den Adel from the band Within Temptation, has spawned a music video that has been viewed over 242 million times on YouTube.[41] Since the release of Imagine, Van Buuren has been working with Benno de Goeij of Rank 1 on solo productions and remixes.[citation needed] On 1 May 2008, he celebrated with various artists the 350th episode of A State of Trance at Noxx, Antwerp, Belgium. He was voted No. 1 in the 2008 DJ Mag again.

He collaborated with his brother, guitarist Eller van Buuren, at Together As One in Los Angeles, U.S., on New Year’s Eve 2009, as well as on Armin’s 2008 studio album Imagine. His performance with his brother at Together As One was also the last event of his Armin Only: Imagine world tour. To celebrate the 400th episode of A State of Trance, he performed at three shows with various artists in April, 2009 at Club Butan, Wuppertal, Germany, AIR, Birmingham, United Kingdom and Maassilo, Rotterdam, Netherlands.

Also in 2009, Foreign Media Games announced the production of Armin van Buuren: In the Mix, a music video game being produced in collaboration with Cloud 9 Music and Van Buuren’s Armada Music label. The title was released on 12 November 2010 exclusively for the Wii console.[42] He was voted number one DJ in the 2009 DJ Mag for the third consecutive year.